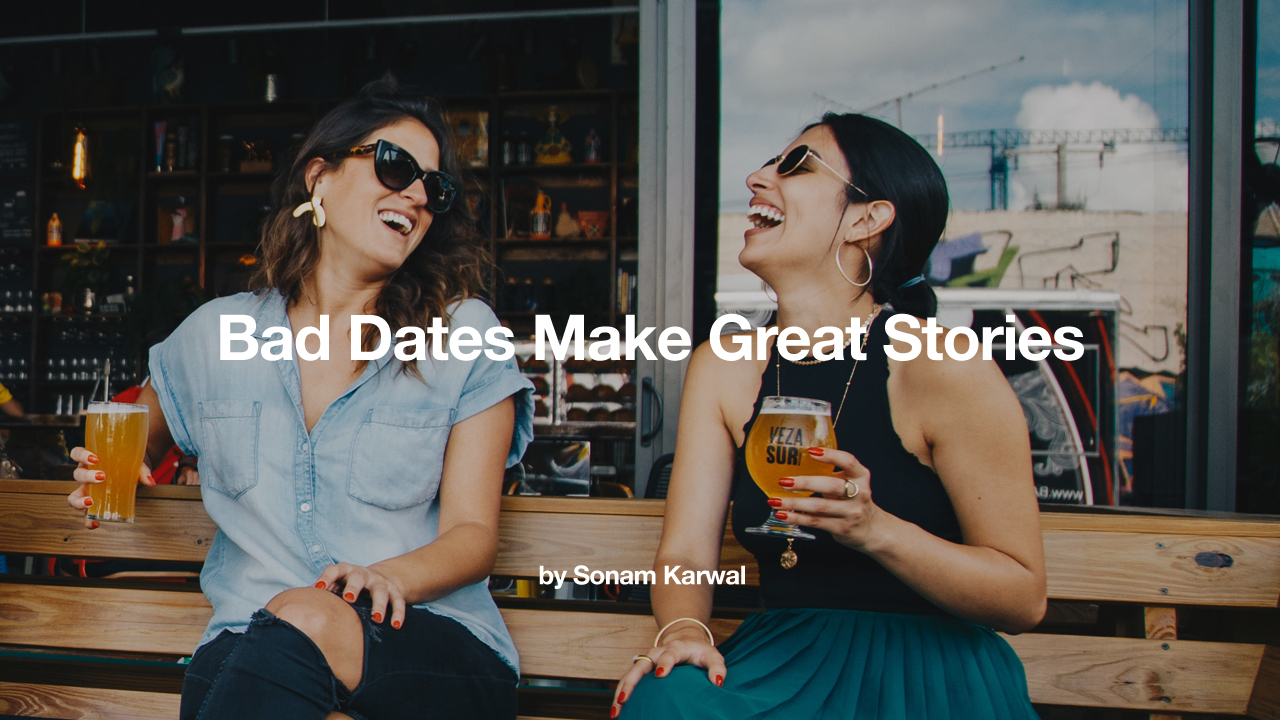 I’ve had my fair share of awful dates and some of these stories (when I look back on them now) are pretty hilarious. As you can imagine, they were not so funny at the time!

Now that I look back on it I would say one of the most hilarious of them was when I was meeting a guy after work at a coffee shop. I gave him a call when I finished to see how far he was, he said he was on the train and next stop was me. I gave him directions to the coffee shop and waited. 45 minutes later he’s still not there (first red flag). Now I know you’re thinking, why did you wait for so long? And the only reason for this was because it was through family and I didn’t want to disappoint anyone. 50 minutes later he finally gets to me and doesn’t even have the decency to apologise for being late (second red flag). We sat down, had our introductions and he told me that his mum and sister “coached” him on what topics to talk to me about (MAJOR LOL – and third red flag). I soon found out that he dropped out of university, doesn’t have a job and can’t drive (fourth, fifth and sixth red flag). About 20 minutes into the date my phone rang. I never answer my phone on a date but this was my get out of jail free card, I had to fake a work meeting and get out of there ASAP! Altogether we were on the date for around 40 minutes, we were in a coffee shop and he didn’t even have the decency to buy me a coffee!!! We left on good terms but I text him saying we don’t have much in common so it won’t work. A month later his dad rings my mum to say how happy he is that we’re dating. EXCUSE ME!?

Another bad date story started with my number being given to this guy through a family friend. He sent me a message on WhatsApp, something along the lines of, “I’ve been given your number to converse with you to see if we are compatible”… Converse! WHAT?! Anyway, we spoke for a few days and he changed his WhatsApp picture everyday, each picture was scarier than the last. So after a few days of speaking he asked to meet up for coffee. Let me just add, my WhatsApp picture was of myself and a friend, he never asked which one I was, so when I questioned why he didn’t ask, his answer was, ‘doesn’t matter I’ll find out on the date’. I was freaked out and I begged my friend to go instead of me, I even offered to pay her! Fast forward to the date, he was 15 minutes late and every time he asked me a question, he interrupted and decided to answer it for me. It was the longest hour of my life. So, I get home and send a polite text thanking him for the coffee and also mentioning that I don’t think we’re compatible. He replied that he already told his mum it went well. Block and delete.

You learn a hell of a lot by going on dates. Not everyone is going to be your cup of tea, and you won’t be theirs, but that’s the point of dating, you date to see whether you like someone enough to be with them. If they don’t like you that much, it does not make them a terrible person.

What I learned from this
I have a great group of non judgemental friends that I can vent to about stuff like this. I tell them about my horrific experiences (at the time) and we laugh for hours about it. It didn’t get me down, but gave me an idea of what I was actually looking for. I never thought that my partner knowing how to drive would be on my checklist, but I can 100% say when I looked at the bigger picture and the more I thought about it, it is a big deal (to me anyway). Everyone has their criteria, and it’s important to make note of your personal deal breakers and preferences as this will help in reflecting on your past experiences and improving your future ones.

Get over a bad date by talking about it
I guarantee you won’t be the only one with a bad date story. After the initial shock of it being a disaster, sharing is a great way to get support, trade stories and even have a laugh about it all. By doing so you may find that there is a pattern in the type of people you are attracting and dating.

Practice makes perfect
If you haven’t dated in a while, chances are you’ll be a bit nervous and rusty with what to talk about and you may not even know what you’re looking for or want. If you’re speaking to someone but know that they aren’t your ideal partner, go on the date anyway. Use this opportunity as practice so you’ll be fully prepared for when the right person comes along.

Don’t let it be off putting
If you really dwell on the bad dates it can make you feel like there is never going to be anyone good enough. But take a trip down memory lane and think about your good dates and how some of them lead to relationships. What made those dates good? It’s a little reminder that good dates and relationships are possible because you’ve experienced them and they will happen again.

So go out there and try again!
Sonam, AsianD8 HQ